Do you remember the old Choose Your Own Adventure or Fighting Fantasy books from years ago? If so, you will get a huge nostalgia hit from Themeborne's new title in their 'Escape the Dark' series of games; Escape the Dark Sector! 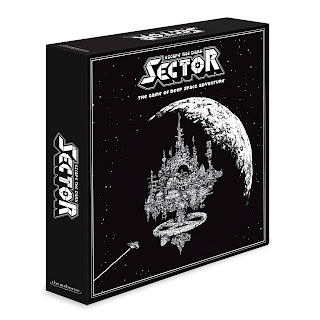 The game is a co-operative game for 1-4 players, and it takes literally minutes to learn. Each play through can last between 30-45 minutes and the players must work together to traverse through the space station to achieve their goal and escape. Teamwork is vital in this game, because if one player dies, everyone loses!

The game plays very much like a Choose your own Adventure story, but instead of jumping from page to page to progress the story, this is done by cards which are selected from randomised decks at the beginning of the game. Building your story deck of cards is as simple as choosing four cards from three preshuffled decks, each of which is an 'act'. (Everyone knows any good story is told in three acts.) 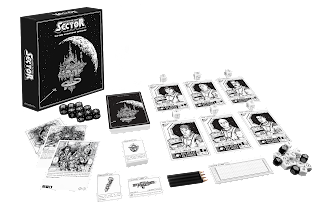 Once the story deck is ready, it's time to face whatever terrors await in the darkness. One aspect I really enjoyed of this game is the addition of ranged attacks as well as the melee option. Having the choice to stay back and pick off enemies from a distance before moving in to finish them off is a really nice mechanic and a welcome addition. This added another element of excitement and danger to an already thrilling setting.

Having a team strategy also makes gameplay engaging and fun for all the players on how they decide to tackle some of the obstacles. With an option to have more powerful attacks at the expense of some health, another element comes into play.

I will say this though, don't expect an easy ride. This game is tough. Not in a brutalise and demoralise the players kind of way, but in a 'One more go' way. Unlucky rolls may be the undoing of a team, and it rarely feels unfair, but just gives you the determination to try again. With that in mind, the difficulty level maybe a little tough for younger players.

It would be unjust of me not to mention the spectacular artwork that has been done for this game, as with Escape the Dark Castle, the black and white pictures evoke more of the nostalgia of the 'gamebooks' that I mention at the beginning of the review and really capture the essence of years gone by. This retro styling may not be to everyone's tastes with the monochromatic style, especially if you are used to brightly coloured visuals, but I feel this fits the mood of the game perfectly. 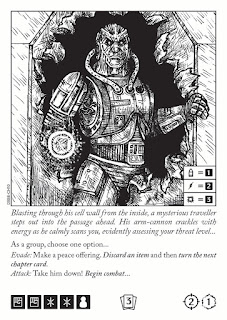 For even more game immersion, I'd recommend picking up the soundtrack for Escape the Dark Sector, as it enhances the mood and adds another element to the entire experience.

In summary, Themeborne have done it again with their winning formula. A tight and engaging game, with masses of atmosphere and replayability. Even after several playthroughs with an analytical mind, I'm really struggling to find many negatives with Escape the Dark Sector aside from the difficulty level being a little on the high side.

I think Escape the Dark Sector will make a good opener to any game night, and is worth checking out and seeing for yourself, because I can't praise this game enough. I don't think this review does the game the justice it deserves.

You can order Escape the Dark Sector direct from Themeborne's website - https://www.themeborne.com/escape-the-dark-sector

Disclaimer - Themeborne sent a copy of Escape the Dark Sector to me for review purposes, however this review is based on my own copy which I backed through Kickstarter. I have not been paid by Themeborne or any associated parties for this review.

Hi everyone! After a quiet couple of months on the blog, I've found this absolute gem which I would have loved to have posted back when I did a little Look and Read season a while back but I couldn't find it online, but it's here now and not a moment too soon! I give you Geordie Racer!

The story was set in Newcastle-upon-Tyne and the surrounding area, and featured pigeon racers and runners competing in the Great North Run. The main character is Spuggy Hilton (Spuggy being a nickname - the Geordie word for sparrow), who isn't a runner like the rest of his family, but is a keen pigeon fancier and owns 'Blue Flash' - one of the best birds in Newcastle. He and his friend Janie observe some suspicious activity, and link a spate of local art robberies with obscure messages they find on some of the pigeons, but find they have even more problems when they go to spy on the crooks.

It's been a while since I posted anything new to the site, unfortunately it's getting harder to find shows to share, but this time I've got a show I've been searching for for over a year now, it's the classic Filmation cartoon Sport Billy!


The story revolves around a young boy named Sport Billy who is from the planet Olympus (a twin of Earth on the opposite side of the Sun) which is populated by athletic god-like beings. Billy himself has a magic size-changing gym bag - the Omni-Sack - which produces various tools as he needs them. He travels to Earth on a mission to promote teamwork and sportsmanship. Described by the show's theme song as a "hero from another planet", Billy battles the evil Queen Vanda and her gnome-like henchman, Snipe. Vanda's mission is to destroy all sports in the galaxy since fairness disgusts her.

Billy is assisted by two faithful companions, a girl named Lilly and a talking dog named Willy. The trio travel around in a time traveling spaceship, which resembles a giant wind-up clock, complete with a ringing bell, and mounted on two rocket engines. Each episode the trio travel through time to save a different Earth sport from Queen Vanda's grasp.
Posted by Calum at 22:33 No comments:

Today we honour a great fantasy writer who sadly passed away earlier today with the animated adaptation of one of his novels, with Terry Pratchett's Discworld - Soul Music!

Based on Terry Pratchett's Novel. On Discworld (a world carried by four elephants standing on a huge turtle in space), a small girl, Susan Sto Helit, has got a major problem. Her grandfather is Death, who wants to forget that he has just "processed" his adopted daughter and her husband who was Susan's mother and father as this is causing him great grief and Death is a person that can remember everything, much to his chagrin. Susan find herself pressed into taking over Death's "duty" but finds that she is falling in love with an elf/human, Imp, who is slowly being taken over by a kind of "musical" force that is forcing Imp and his friends to play Rock Music to the Discworld. The Rock Music is proving to be a great success, but it has got plans for Imp and everybody wanting to play it and it is up to Susan, the head of the wizards, the Archchancellor and Death (that is, if he can be found and made to remember who/what he is.) to stop it before it conquers the entire Discworld...
Posted by Calum at 18:36 No comments:

Spinning the tale of Spider-Man in a completely different direction late in 1999 came this short lived series featuring Spidey in situations never before encountered in Spider-Man Unlimited!


While covering the launch of John Jameson's one-man mission to Counter-Earth (another Earth located on the far side of the Sun), Spider-Man attempts to stop his two symbiote adversaries Venom and Carnage from boarding the shuttlecraft. Blamed for Jameson losing contact with our Earth, Spider-Man becomes a target of persecution by the media and the public. Believed to be dead after saving a person's life in a fire, Peter Parker uses the ruse to embark on a mission to retrieve John Jameson on Counter-Earth, using nanotechnology stolen from Reed Richards to design a new suit that incorporates stealth technology and sonic weaponry. Making his way to the planet, Spider-Man learns that Jameson has fallen in with a band of freedom fighters opposed to the High Evolutionary whose Beastials, hybrids of animal and humanoid attributes, are the dominant species whilst humans are the second-class minority.

With Jameson reluctant to return until all of the Beastials are defeated, Spider-Man elects to remain on Counter-Earth, blending in as best as he can as Peter Parker, and fighting the High Evolutionary and his Knights of Wundagore alongside the rebels as Spider-Man. It is soon discovered that Venom and Carnage are also on Counter-Earth, and are following orders from the Synoptic, a hive-minded legion of Counter-Earth symbiotes. This series also shows the animated version of John Jameson's Man-Wolf form, as well as superhero versions of mainstream villains the Green Goblin and the Vulture.
Posted by Calum at 17:25 No comments:

If you have any comments, suggestion or just want to say Hello, contact us by email at broomcupboardclub@hotmail.com